Team TMI® Closes the Gap in Your Air Barrier System

Our calibrated testing equipment is company owned and all work is self-performed by our certified Building Enclosure Specialists.

TMI® is a member of the American Society of Testing and Materials (ASTM), the Untied States Green Building Council (USGBC), the Air Barrier Association of America (ABAA), and the International Association of Certified Thermographers (IACT).

What makes us stand apart?
The principals of TMI® have been involved in the construction industry since 1982 as land developers, as builders of residential and commercial properties, and as early adapters of air barrier materials and methods. Our past experience comes from hands-on construction project management, as principals. We have walked the walk. From design drawings and specifications, through contract documents, subcontracted trades-coordination and sequencing, inspections, punch out and completion on-time on-budget, with little to no warranty issues. We have lived and understand the process better than those who have merely sat in classes or behind a desk.

TMI® was formed to assist building owners reduce energy costs, consumption, and sustain the life of buildings. What started out as an infrared inspection firm specializing in diagnosing moisture and air infiltration quickly grew into a building enclosure and consulting firm. Our years of experience, knowledge and understanding of the construction process, trades, air barrier materials, and thermal and moisture protection sets us apart from our competitors.

TMI® Building Enclosure Specialists are expert in building enclosure air barrier systems. We possess the experience and technical building science knowledge of design, performance, systems and construction relative to the building enclosure and are recognized leaders in their field of expertise. TMI® is able to provide solutions that can actually be implemented in the field.

We approach every project as if it were our own. We analyze established best practices to ensure a successful outcome of an airtight enclosure for the general contractor and owner. Our principals stay with you every step of the way, and guide you through the process.

TMI® was able to secure a subcontracting partnership with University California -Davis on a DoE/DoD ESTCP project to demonstrate Automated Aerosol Sealing of Building Envelopes at Military Bases along the East Coast of the United States, demonstrations began in 2016. TMI® was tasked with identifying and sourcing demonstration sites, performed new air sealing technology demonstrations, along with pre and post air leakage testing at various military installations at Ft. Bragg, MCB Quantico, NSA Mechanicsburg, NSA Philadelphia. TMI® assisted in further development of the technology and process over a two year period providing beta testing, recommendations for improvement to the technology and data collection on air sealing existing buildings.
To learn about our involvement and Automated Aerosol Sealing of Building Envelopes – Air Tightness Testing of the Building Enclosure please visit:
https://wcec.ucdavis.edu/wp-content/uploads/2018/07/EW-201511-Final-Report.pdf

TMI® was awarded United States Army Corp of Engineers (USACE) project Shield 5 Program, Site 2, 3, 5 and 7, for the State of Qatar. The Shield 5 project was the largest ever undertaken by USACE Middle East District. Site 2, 3, 5 and 7 consisted of 100 buildings.

The USACE and the GC requested a pre-test presentation for Government of Qatar. TMI® delivered, tailoring a PowerPoint TMI® previously presented at the annual Air Barrier Association of America conference.

When the GC accelerated the work to deliver all 100 buildings twelve months from ground breaking and six months ahead of schedule, TMI® kept ahead of the curve. By providing a cost effective inspection and testing schedule, guiding the GC and interfacing with USACE, not one building failed the USACE test. TMI® performed on budget and ahead of schedule. From design review to final testing and USACE approval, TEAM TMI® CLOSES THE GAPS IN YOUR AIR BARRIER SYSTEM REQUIREMENTS. 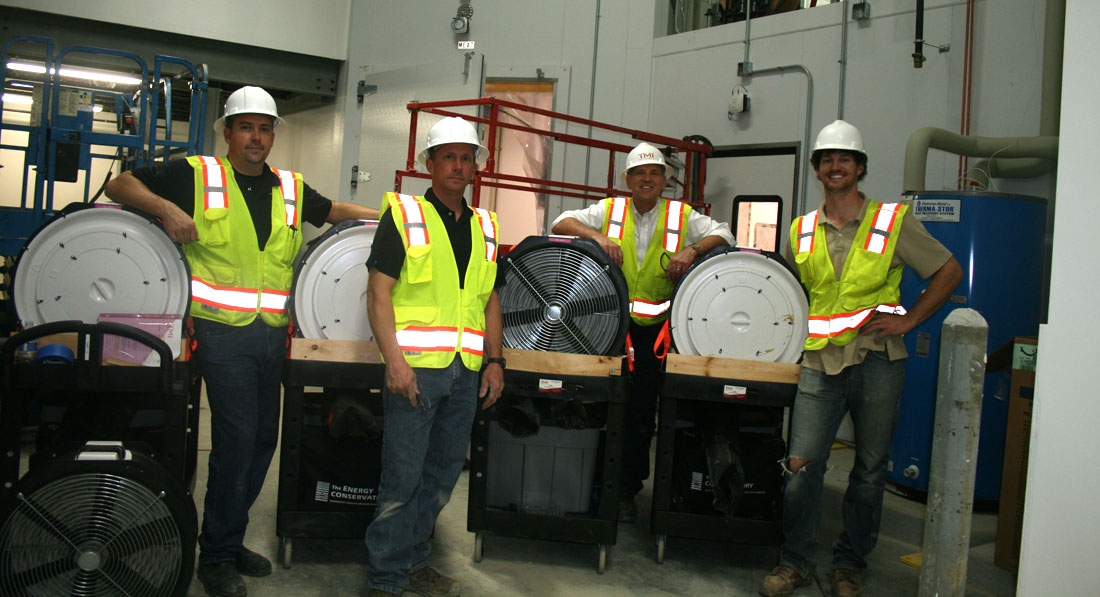 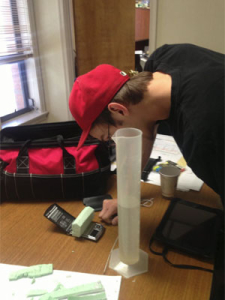 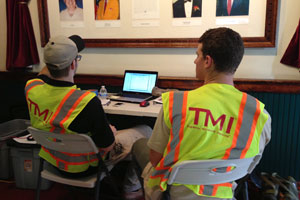 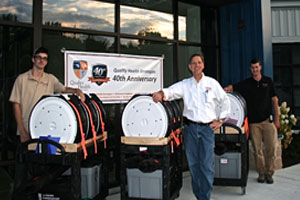 TMI® just starting the preparations for an air leakage test at a Quality Health Strategies building in Easton, Maryland. 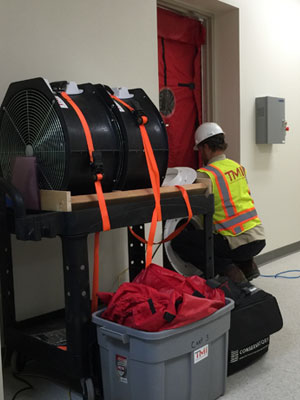 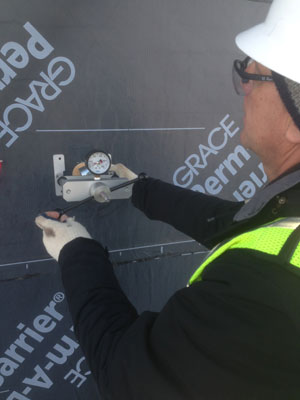 What Clients Say About Us and Our Services

Whiting Turner had a great experience with TMI on the Branch Health Clinic in Gulfport, MS. We were very uneasy with our air barrier quality due to it being installed under a different contractors supervision. The TMI team provided valuable insight and suggestions/solutions for our issues that clearly came from years of experience. Their knowledge of the air barrier system, coupled with their superior organization and cooperation, were a key ingredient to successfully passing this phase of the project. The team was prompt, and worked diligently through the night completing the whole building air leakage test, infrared thermography and diagnostics so as to not hold up our construction schedule in any way.
From expedited turnaround on paperwork and valued engineering prior to being on site, to the quality of workmanship and professionalism once on site, I was very impressed with the TMI team every step of the way.
WT will certainly be keeping TMI in mind for future projects.”
–The Whiting-Turner Contracting Company, Baltimore, MD

“Donna, I wanted to take a moment to thank TMI for their dedication to the Berlin Library Project over the last 12 months. Throughout the project TMI provided valuable insight into the project requirements, the air barrier system and their recommendations for a continuous air barrier system. This involvement during the pre-planning and construction phase was instrumental to the success we experienced. Throughout the project, your team was professional, organized, timely, and able to react and respond to any changes or additional requests that the project needed. We appreciate that TMI consistently arrived as scheduled and even worked late into the night performing the whole building air leakage testing, infrared thermography and diagnostics so as not to hold up the construction schedule.
Again, the Whiting-Turner team at the Berlin Library project was impressed with TMI’s attention to detail, and we look forward to working with you in the future.”
–The Whiting-Turner Contracting Company, Salisbury, Maryland

“B.L. Harbert wants to thank you and your team for their exceptional work on the P-688 and P921 projects at Camp Lemonnier, Djibouti, Africa. Your team provided valuable insight into the project requirements, the air barrier system testing and their recommendations for a continuous air barrier system during testing of our construction.
Their knowledge, professionalism and organization were beneﬁcial in getting these projects to pass the whole building testing phase.
Your team arrived as planned and worked diligently with BLHI staff through multiple nights performing the whole building air leakage testing, infrared thermography and diagnostics so as not to hold up the construction schedule.
We were impressed with their attention to detail and the timely turn around on all project reports and submittals.
B.L. Harbert looks forward to working with TMI® in the future.”
–B.L. Harbert International LLC, Birmingham, AL

“Hensel Phelps wants to thank you and your team for their exceptional work on the P656 DSS Facility Addition project at the Quantico Marine Corps Base in Virginia. Your team’s knowledge, professionalism and overall organization were extremely helpful in getting this project wrapped up. The air/water infiltration testing, thermography, whole building air leakage testing and diagnostic fog testing that conducted were crucial in identifying issues and implementing solutions in a timely manner. We were also very impressed with your attention to detail and timely turn around on all submittal documents. Hensel Phelps appreciates your efforts and looks forward to working with TMI® again in the near future. I will refer you to our other projects and organizations who may be in need of your quality services and expertise.”
Project Manager
–Hensel Phelps

“I want to thank you and your team for their exceptional work on the Fredericksburg Courthouse project in Virginia. Your teams’ experience in testing large building was evident. I was also very impressed with your attention to detail and timely turn around on all submittal documents.”
–English Construction Company, VA

“Your efforts and insight helped form a plan for energy improvements on the facility. We especially appreciated how accommodating your team was in returning for follow-up air leakage tests and providing additional diagnostic testing.”
–DeVere Insulation Co. MD

“As founder of A-A Exteriors it has been my genuine privilege working with TMI® over the past few years. Throughout my time working with TMI®, their team has always shown a high level of professionalism and organization in every aspect of the work. Their comprehensive approach to whole building air leakage testing and thermography is mirrored in their attention to detail in submitted documents.”
–Jeff Knutson, Founder

“TMI® was requested to mobilize immediately to perform an Air Leakage Test ASTM E779 in St. Mary’s County, Maryland on a new Taco Bell restaurant.
“Due to your consistent diligence last evening, we were able to receive the certificate of occupancy for the new Taco Bell Restaurant in Charlotte Hall, Maryland. Thank you for your dedication to your calling.”
–C.W. Hayes Construction Co.

“We would like to thank you and your team for their good work on the USACE Shield-5 Program, Site 2, 3, 5 and 7 project in the State of Qatar. Your team’s knowledge and professionalism were instrumental in getting multiple buildings to pass the USACE Air Leakage Test Protocol on time and on budget, and your team’s experience in air barrier continuity and testing large buildings was evident. We look forward to working with team TMI® again in the future.”
–AICI